The Life Cycle of a Project Idea

A great idea does not usually go straight from proposal to implementation. You may think it would be a great idea to construct a green roof on top of the CITE building, but before anyone gives you the go ahead for such an expensive and time-consuming project, they will need to know that you have done research to ensure the idea is cost effective and will actually work.  Figure 8.3.1 breaks down the various stages a project might go through, and identifies some of the typical communication tasks that might be required at each stage.

Most ideas start out as a proposal to determine if the idea is really feasible, or to find out which of several options will be most advantageous. So before you propose the actual green roof, you propose to study whether or not it is a feasible idea. Before you recommend a data storage system, you should propose to study three different systems to find out which is the best one for this particular situation. Your proposal assumes the idea is worth looking into, convinces the reader that it is worth spending the time and resources to look into, and gives detailed information on how you propose to do the “finding out.”

Once a project is in the implementation phase, the people who are responsible for the project will likely want regular status updates and/or progress reports to make sure that the project is proceeding on time and on budget, or to get a clear, rational explanation for why it is not. To learn more about Progress Reports, go to 7.3 Progress Reports.

(How to write a Business Proposal in 10 Easy Steps, n.d.)

Proposals are some of the most common types of reports you will likely find yourself writing in the workplace. A proposal, in the technical sense, is a document that tries to persuade the reader to implement a proposed plan or approve a proposed project. Most companies and organizations rely on effective proposal writing to ensure successful continuation of their business and to get new contracts. With an effective proposal, the writer convinces the reader that the proposed plan or project is worth doing (worth the time, energy, and expense necessary to implement), that the author is the best candidate for implementing the idea, that the proposed plan is realistic and feasible, and that the proposed course of action will result in intangible benefits.

Proposals are often written in response to a Request For Proposals (RFP) by a government agency, organization, or company. The requesting body receives multiple proposals responding to their request, reviews the submitted proposals, and chooses the best one(s) to go forward. Thus, your proposal must persuade the reader that your idea is the one most worth pursuing. Proposals are persuasive documents intended to initiate a project often in response to a challenge and get the reader to authorize a course of action proposed in the document. These might include proposals to

Proposals can have various purposes and thus take many forms; they are usually adapted to the situation at hand. They may include sections such as the following:

Proposals written in a technical writing course generally do the following: 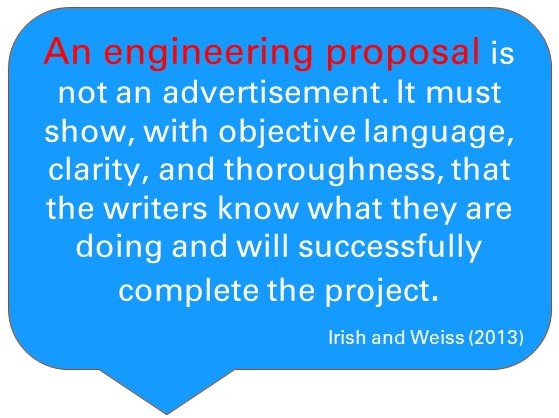 All proposals must be convincing, logical, and credible, and to do this, they must consider audience, purpose and tone. They are persuasive documents, so all components must be carefully considered as you integrate them into the document. You should also do the following:

Each proposal will be unique in that it must address a particular audience, in a particular context, for a specific purpose. To read sample proposals, visit David McMurrey’s Online Technical Writing # Proposals for examples. However, the following offers a fairly standard organization for many types of proposals:

Proposals are fundamentally persuasive documents, so paying attention to the rhetorical situation—position of the reader (upward, lateral, downward or outward communication), the purpose of the proposal, the form, and the tone—is paramount.

As always, adhere to the 7 Cs by making sure that your writing is

A proposal or recommendation needs research to convince the reader that the idea is worth pursuing or implementing. A project proposal could be rejected for any of the following reasons related to insufficient research:

Visme. (2021). How to write a proposal in 10 easy steps [Video]. Youtube. https://www.youtube.com/watch?v=LCwFmrXSnCs

Once there is an idea, a project goes through a design process made up of four stages.

Technical Writing Essentials by Suzan Last is licensed under a Creative Commons Attribution 4.0 International License, except where otherwise noted.