After reading this unit, you will be able to

Share the love! Goodwill messages are as essential to healthy professional relationships as they are in personal ones. Thank-you, congratulatory, and sympathy notes add an important, feel-good human touch in a world that continues to embrace technology that isolates people while being marketed as a means of connecting them. The goodwill that such messages promote makes both sender and receiver feel better about each other and themselves compared with where they’d be if the messages weren’t sent at all. In putting smiles on faces, such notes are effective especially because many people don’t send them—either because they feel that they’re too difficult to write or because it doesn’t even occur to them to do so. Since praise for some can be harder to think of and write than criticism, a brief guide on how to do it right may be of help here.

The 5 S’s of Goodwill Messages

In the world of business, not all transactions involve money. People do favours for each other, and acknowledging those with thank-you notes is essential for keeping relations positive. Such messages can be short and simple, as well as quick and easy to write, which means not sending them when someone does something nice for you appears ungrateful, rude, and inconsiderate. Someone who did you a favour might not bother to do so again if it goes unthanked. Such notes are ideal for situations such as those listed in Table 28.1:

Table 28.1: Common Reasons for Expressing Thanks in Professional Situations

In most situations, email or text is an appropriate channel for sending thank-you messages. In fact, sending a thank-you note within 24 hours of interviewing for a job is not just extra-thoughtful but close to being an expected formality. To stand out from other candidates, hand-writing a thank-you card in such situations might even be a good idea.

Following the 5 S’s of goodwill messages, a typical thank-you email message for a favour might look like the following: 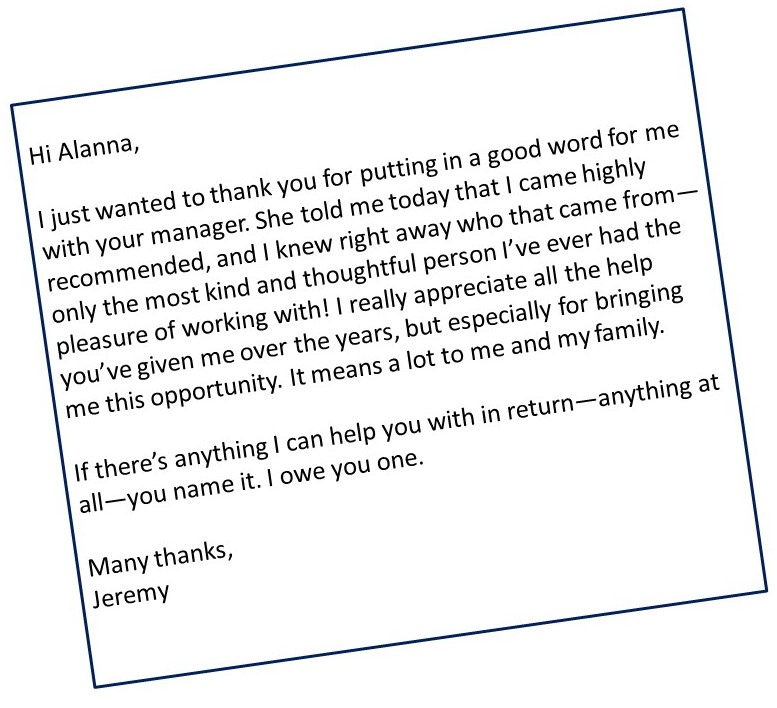 Notice that this message is short, specific to the situation that prompted it, sincere, relatively selfless, and spontaneously sent the day of the incident that prompted it. It would certainly bring a smile both to the recipient and sender, strengthening their professional bond.

Celebrating the successes of your professional peers shows class and tact. It’s good karma that will come back around as long as you keep putting out positive energy. Again, the 5 S’s apply in congratulatory messages, especially selflessness. Such messages are all about the person you’re congratulating. You could say, for instance, I really admire how you handled yourself with such grace and poise under such trying circumstances in the field today.

Few situations require such sincerity and care with words as expressions of sympathy. Misfortune comes upon us all, and tough times are just a little more tolerable with the support of our friends, family, and community—including those we work with. When the loved-one of a close associate dies, for instance, expressing sympathy for their loss is customary, often with a card signed by everyone in the workplace who knows the bereaved. You can’t put an email on the mantle like you can a collection of cards from people showing they care.

What do you say in such situations? A simple I’m so sorry for your loss, despite being a stock expression, is better than letting the standard Hallmark card’s words speak for you (Guffey et al., 2016, p. 147). In some situations, laughter—or at least a chuckle—may be the best medicine, in which case something along the lines of Emily McDowell’s witty Empathy Cards would be more appropriate. McDowell’s There Is No Good Card for This: What to Say and Do When Life Is Scary, Awful, and Unfair to People You Love (2016) in collaboration with empathy expert Kelsey Crowe, PhD, provides excellent advice. Showing empathy by saying that you know how hard it can be is helpful as long as you don’t go into any detail about their loss or yours. Remember, these messages should be selfless, and being too specific can be a little dangerous here if it produces traumatic imagery. Offering your condolences in the most respectful, sensitive manner possible is just the right thing to do.

It wouldn’t go over well if someone thanked you for your help and you just stared at them silently. The normal reaction is to simply say You’re welcome! Replying to goodwill messages is therefore as essential as writing them. Such replies must be even shorter than the messages that they respond to. If someone says a few nice things about you in an email about something else, always acknowledge the goodwill by saying briefly “Thank you very much for the kind words” somewhere in your response. Without making a mockery of the situation by thanking a thank-you or shrugging off a compliment, returning the love with nicely worded and sincere gratitude is the right thing to do (Guffey et al., 2016, p. 147).

Recommendation messages are vital to getting hired, nominated for awards, and membership in organizations. They offer trusted-source testimonials about a candidate’s worthiness for whatever they’re applying to. Like the résumé and cover letter they corroborate, their job is to persuade an employer or selection committee to accept the person in question. To be convincing, recommendation and reference letters must be the following:

Not all employers require recommendation letters of their job candidates, so only bother seeking a recommendation letter when it’s asked for. Opinions are divided on whether such documents are actually useful, since they are almost always “glowing” because they tend not to say anything negative about the applicant despite the expectation that they be objective. Some employers—especially in larger organizations—are instructed not to write recommendation letters (or are limited in what they can say if called for a reference) because they leave the company that writes them open to lawsuits from both the applicant and recipient company if things don’t work out.

On the other hand, recommendation letters provide potential employers with valuable validation of the job applicant’s claims, so it’s worth knowing how to ask for one and what to ask for if they’re required as part of a hiring process. Even if it may be some years before you’re in a position to write such letters yourself, knowing what information to provide the person who agrees to write you a recommendation is useful to you now. Indeed, since most managers are busy people, they might even ask you to draft it for them so they can plug it into a company letterhead template, sign it, and send it along. If so, then you could ghost-write it using the following section as your guide.

Let’s view how to write letters of recommendation before looking at the individual sections of the letter.

Because honesty is of paramount importance in a recommendation letter, including specific evidence of performance flaws wouldn’t be out of place, especially if used in a narrative of promotion and improvement. Including criticism of the candidate helps the credibility of the endorsement because it makes it more believable. After all, no one is perfect. Criticism resolved by a narrative of improvement, however, strengthens the endorsement even further. Consider, for instance, how good this looks:

Ms. Barrie tended to sacrifice the quantity of completed research tasks to quality, completing perhaps 17 out of an expected 25 assignments per day. However, she increased her speed and efficiency such that, in her last year with us, she was completing more tasks with higher accuracy than any other assistant we’ve ever had.

Of course, this general frame for recommendations can be adapted and either extended or trimmed for channels other than letters. LinkedIn, for instance, allows users to endorse each other, but the small window in which the endorsement appears favours a smaller wordcount than the typical letter format. In that case, one paragraph of highlights and a few details is more appropriate than several paragraphs, especially if you can get several such endorsements from a variety of network contacts.

How to Request a Recommendation Letter

When a recommendation is necessary, be sure to ask a manager or supervisor who’s known you for two years or more if they can provide you with a strong reference. If they can’t—because they’re prohibited from doing so by company policy or they honestly don’t think you’re worthy of an endorsement—they’ll probably just recommend that you find and ask someone who would. Don’t be shy about asking for one, though. If they aren’t directed otherwise, management understands that writing such messages is part of their job. They got to where they are on the strength of references and recommendations from their previous employers, and the “pay-it-forward” system compels them to provide the same for the people under—people like you. That way, you too can move up in your career.

Knowing that every employment situation you’re in provides an opportunity for a reference when it’s time to move on, you should always do your best so that you can get a strong reference out of it. Consider also that if a résumé lists references at the end but omits them for certain job experiences, a hiring manager will wonder why you weren’t able to get a reference for that job. It certainly could have been due to company policy prohibiting managers from providing references for legal reasons or conflict with management that was entirely their fault (not all managers are decent human beings as we shall discuss in unit 29); without the full picture, however, the omission opens the door to doubts about the candidate.

Despite being treated by some as optional, goodwill messages are essential to healthy professional relationships and professional advancement as long as you follow the writing conventions associated with them.

1. Partner up with a classmate you admire and write an endorsement message for him or her on LinkedIn.

Communication@Work by Jordan Smith is licensed under a Creative Commons Attribution 4.0 International License, except where otherwise noted.