Concern about changes in the price level has always dominated economic discussion. With inflation in Canada generally averaging only between 1% and 3% each year since 1996, it may seem surprising how much attention the behaviour of the price level still commands. Yet inflation was a concern in 2004 when there was fear that the rising price of oil could trigger higher prices in other areas. Just the year before, when inflation fell below 2%, there was talk about the risk of deflation. That did not happen; prices continued rising. Inflation rose substantially in the first half of 2008, renewing fears about subsequent further increases.  2010 brought on renewed concern of possible deflation. Just what are inflation and deflation? How are they measured? And most important, why do we care? These are some of the questions we will explore in this section.

There are two key points in these definitions:

Why Do We Care?

What difference does it make if the average level of prices changes? First, consider the impact of inflation.

Inflation is measured as the annual rate of increase in the average level of prices. Figure 5.6 “Inflation, 1960–2010” shows how volatile inflation has been in the United States over the past four decades. In the 1960s the inflation rate rose, and it became dramatically worse in the 1970s. The inflation rate plunged in the 1980s and continued to ease downward in the 1990s. It remained low in the early 2000s and began to accelerate in 2007 and has remained low since. 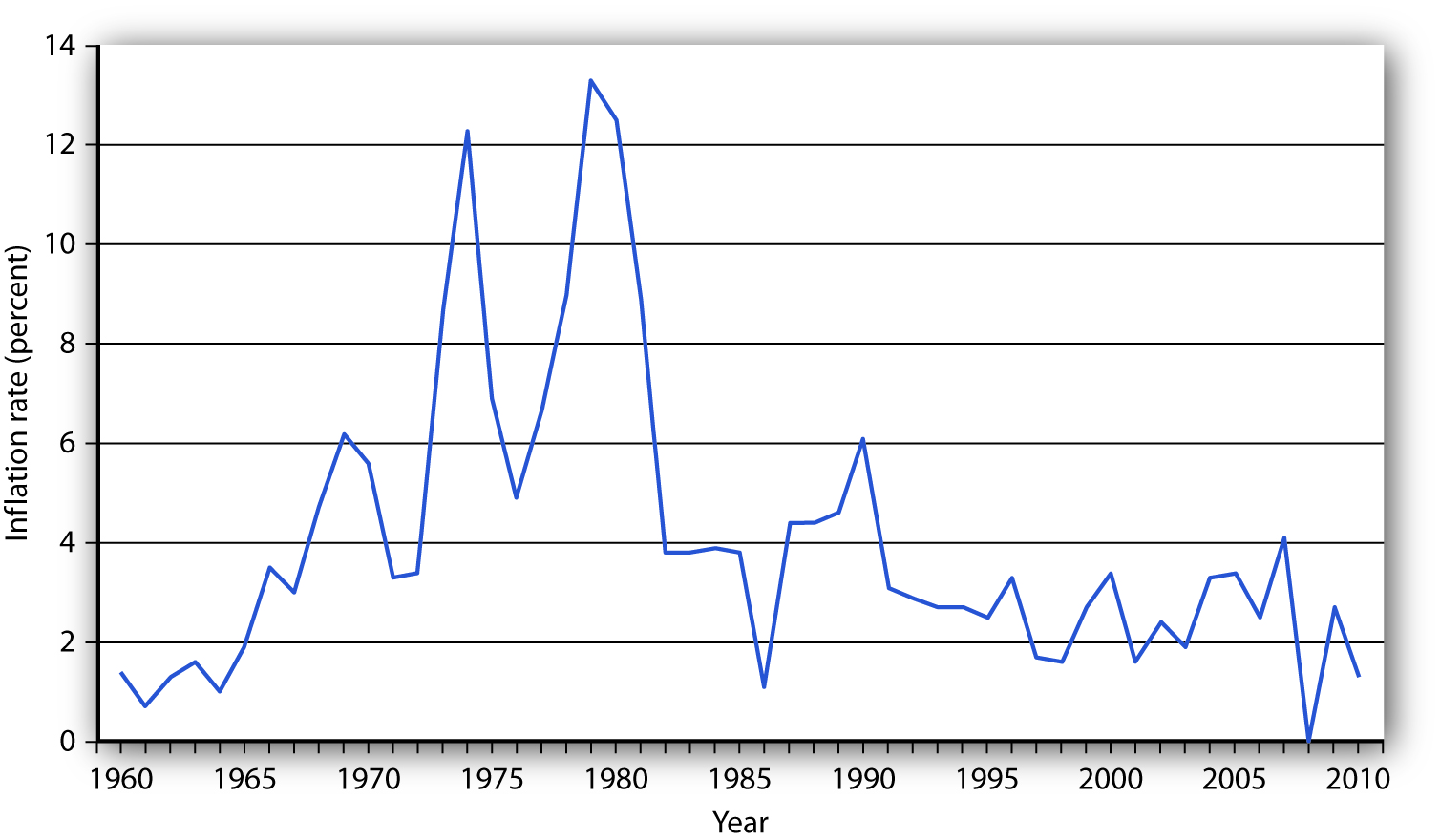 The U.S. inflation rate, measured as the annual rate of change in the average level of prices paid by consumers, varied considerably over the 1960–2010 period.

Suppose that you have just found a $10 bill you stashed away in 1990. Prices have increased by about 50% since then; your money will buy less than what it would have purchased when you put it away. Your money has thus lost value.

Money loses value when its purchasing power falls. Since inflation is a rise in the level of prices, the amount of goods and services a given amount of money can buy falls with inflation.

Just as inflation reduces the value of money, it reduces the value of future claims on money. Suppose you have borrowed $100 from a friend and have agreed to pay it back in one year. During the year, however, prices double. That means that when you pay the money back, it will buy only half as much as it could have bought when you borrowed it. That is good for you but tough on the person who lent you the money. Of course, if you and your friend had anticipated such rapid inflation, you might have agreed to pay back a larger sum to adjust for it. When people anticipate inflation, they can adjust for its consequences in determining future obligations. But unanticipated inflation helps borrowers and hurts lenders.

Inflation’s impact on future claims can be particularly hard on people who must live on a fixed income, that is, on an income that is predetermined through some contractual arrangement and does not change with economic conditions. An annuity, for example, typically provides a fixed stream of money payments. Retirement pensions sometimes generate fixed income. Inflation erodes the value of such payments.

Uncertainty can be particularly pronounced in countries where extremely high inflation is a threat. Hyperinflation is generally defined as an inflation rate in excess of 200% per year. Inflation of that magnitude erodes the value of money very quickly. Hyperinflations occurred in Germany in the 1920s and in Yugoslavia in the early 1990s. There are stories about how people in Germany during the hyperinflation brought wheelbarrows full of money to stores to pay for ordinary items. In Yugoslavia in 1993 there was a report of a shop owner barring the entrance to his store with a mop while he changed his prices.

The inflation rate rose to an astronomical rate in 2008 in Zimbabwe. As the government printed more money and put it in circulation, prices rose. When inflation began to accelerate, the government found it “necessary” to print more and more money, causing prices to rise very fast. The inflation rate in Zimbabwe reached an astonishing 11.2 million percent in July of 2008, according to Zimbabwe’s Central Statistics Office. A loaf of bread cost 200,000 Zimbabwe dollars in February 2008. That same loaf cost 1.6 trillion Zimbabwe dollars by August (CNN, 2008).

Do the problems associated with inflation imply that deflation would be a good thing? The answer is simple: no. Like inflation, deflation changes the value of money and the value of future obligations. It also creates uncertainty about the future.

If there is deflation, the real value of a given amount of money rises. In other words, if there had been deflation since 2000, a $10 bill you had stashed away in 2000 would buy more goods and services today. That sounds good, but should you buy $10 worth of goods and services now when you would be able to buy even more for your $10 in the future if the deflation continues? When Japan experienced deflation in the late 1990s and early 2000s, Japanese consumers seemed to be doing just that—waiting to see if prices would fall further. They were spending less per person and, as we will see throughout our study of macroeconomics, less consumption often meant less output, fewer jobs, and the prospect of a recurring recessions.

And, if you had to use the $10 to pay back a debt you owed, the purchasing power of your money would be higher than when you borrowed the money. The lender would feel good about being able to buy more with the $10 than you were able to, but you would feel like you had gotten a raw deal.

Unanticipated deflation hurts borrowers and helps lenders. If the parties anticipate the deflation, a loan agreement can be written to reflect expected changes in the price level.

The threat of deflation can make people reluctant to borrow for long periods. Borrowers become reluctant to enter into long-term contracts because they fear that deflation will raise the value of the money they must pay back in the future. In such an environment, firms may be reluctant to borrow to build new factories, for example. This is because they fear that the prices at which they can sell their output will drop, making it difficult for them to repay their loans.

Deflation was common in the United States in the latter third of the 19th century. In the 20th century, there was a period of deflation after World War I and again during the Great Depression in the 1930s.

How do we actually measure inflation and deflation (that is, changes in the price level)? Price-level change is measured as the percentage rate of change in the level of prices. But how do we find a price level?

There are four steps one must take in computing a price index:

(While published price indexes are typically reported with this number multiplied by 100, our work with indexes will be simplified by omitting this step.)

Suppose that we want to compute a price index for movie fans, and a survey of movie watchers tells us that a typical fan rents 4 movies on DVD and sees 3 movies in theaters each month. At the theater, this viewer consumes a medium-sized soft drink and a medium-sized box of popcorn. Our market basket thus might include 4 DVD rentals, 3 movie admissions, 3 medium soft drinks, and 3 medium servings of popcorn.

Our next step in computing the movie price index is to determine the cost of the market basket. Suppose we surveyed movie theaters and DVD-rental stores in 2007 to determine the average prices of these items, finding the values given in Table 5.1 “Pricing a Market Basket”. At those prices, the total monthly cost of our movie market basket in 2007 was $48. Now suppose that in 2008 the prices of movie admissions and DVD rentals rise, soft-drink prices at movies fall, and popcorn prices remain unchanged. The combined effect of these changes pushes the 2008 cost of the basket to $50.88.

Using the data in Table 5.1 “Pricing a Market Basket”, we could compute price indexes for each year. Recall that a price index is the ratio of the current cost of the basket to the base-period cost. We can select any year we wish as the base year; take 2007. The 2008 movie price index (MPI) is thus

One widely used price index in Canada is the consumer price index (CPI), a price index whose movement reflects changes in the prices of goods and services typically purchased by consumers. When the media report the U.S. inflation rate, the number cited is usually a rate computed using the CPI. The CPI is also used to determine whether people’s incomes are keeping up with the costs of the things they buy. The CPI is often used to measure changes in the cost of living, though as we shall see, there are problems in using it for this purpose.

Like many other price indexes, the CPI is computed with a fixed market basket. The composition of the basket generally remains unchanged from one period to the next. Because buying patterns change, however, the basket is revised accordingly.

Computing the Rate of Inflation or Deflation

To calculate inflation in movie prices over the 2007–2008 period, for example, we could apply Equation 5.4 to the price indexes we computed for those two years as follows:

Price indexes are useful. They allow us to see how the general level of prices has changed. They allow us to estimate the rate of change in prices, which we report as the rate of inflation or deflation. And they give us a tool for converting nominal values to real values so we can make better comparisons of economic performance across time.

Case in Point: Take Me Out to the Ball Game …

Team Marketing compiles the cost of the basket for each of major league baseball’s 30 teams. According to this compilation, the Boston Red Sox was the most expensive team to watch in 2008; the Tampa Bay Rays was the cheapest. The Rays made it to the World Series in 2008; the Red Sox did not. By that measure, the Rays were something of a bargain. The table shows the cost of the fan price index market basket for 2008.