Table 8.1 showed that bank deposits are the major component of the money supply in Canada, as in most industrial countries. Bank deposits depend in turn on the cash reserves held by banks and the public’s willingness to hold bank deposits and borrow from the banks.

To complete our analysis of how the money supply is determined, we need to examine three things:

The source of the cash in the economy.

The amount of that cash that is deposited in the banking system, rather than held as cash balances by the public.

The relationship between the cash supply to the economy and the money supply that results from public and bank behaviour.

The cash the central bank provides to the economy is called the monetary base (MB) and is sometimes referred to as the stock of high-powered money. It is the legal tender into which bank deposits can be converted. It is the ultimate means of payment in transactions and the settlement of debts. Notes and coins in circulation and held by the banking system are the main part of the money issued by the central bank. As we discussed earlier, the commercial banks hold small settlement balances in the central bank to make inter-bank payments arising from cheque clearings.

Monetary base (MB): legal tender comprising notes and coins in circulation plus the cash held by the banks.

The public’s decisions about the use of cash or banks deposits determine how much of the monetary base is held by the banks. The simple example of deposit creation in Table 8.4 assumed the public deposited all its cash with the banks. This was a useful simplification that ignores changes in the cash people hold. We will drop this assumption in what follows.

Suppose banks wish to hold cash reserves R equal to a fraction rr of their deposits D. Then:

To keep the example simple assume that we can ignore the small amount of cash held by the non-bank sector. As a result, the monetary base is mainly held as cash in bank vaults and automatic banking machines. This means from Equation 8.2 that:

and the deposit multiplier, which defines the change in total deposits as a result of a change in the monetary base, is:

Change in deposits = change in monetary base divided by the reserve ratio,

which will be greater than 1 as long as rr is less than 1.

If, for example, banks want to hold cash reserves equal to 5 percent, and the non-bank public does not change their holdings of cash, the deposit multiplier will be:

We can see from the way we have found the deposit multiplier that it depends on the decisions made by the banks in terms of their reserve holdings. For simplicity the public holds a fixed amount of cash in addition to bank deposits as money. If you experiment with different values for rr, you will see how the deposit and money multiplier would change if the reserve ratio were to change. Furthermore, if the public were to change their cash holdings the cash reserves available to the banks would change and the deposit multiplier would cause a larger change in the money supply.

The importance of bank reserve decisions and public cash holdings decisions is illustrated by recent financial conditions in Europe. As a result of banking crisis and bailouts during and after the financial crisis of 2008, the public had concerns about the safety of bank deposits and decided to hold more cash. At the same time banks found it difficult to evaluate the credit worthiness of potential borrowers and the risks involved in short-term corporate lending or junior government bonds. The public’s cash holdings increased and the banks increased their reserve ratios. These shifts in behaviour would reduce the money supply, making credit conditions tighter, unless the central bank provided offsetting increases in the monetary base.

How big is the money multiplier?

Each $100 change in monetary base would change the money supply by about $960.

Figure 8.1 The monetary base and the money supply 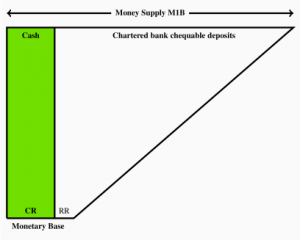 A simple money supply function illustrates the determinants of the money supply. The three key variables are:

MB, the monetary base;

the public’s holdings of cash; and

Using Equation 8.5 above, where M is the money supply, we can write: 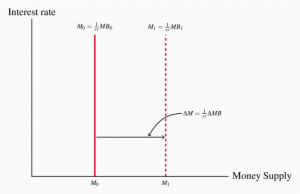